Sorting out the fuel tank position in the bow. The locker was the original bow seat which will now be the base for the fuel tank. There should be enough fall to the injector pump on the engine for the engine to be gravity fed. 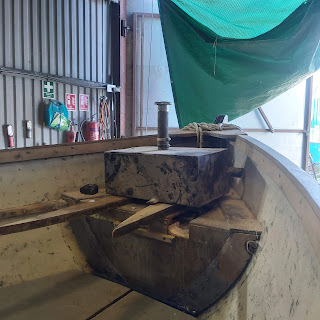 Once it is braced in position, then a deck beam will be made and a small foredeck will be fitted to cover the fuel tank and for the filler to be fitted. 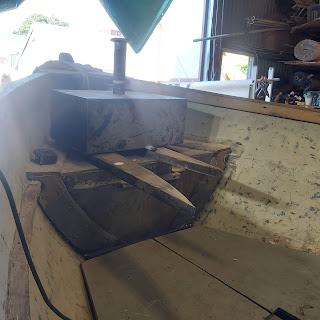 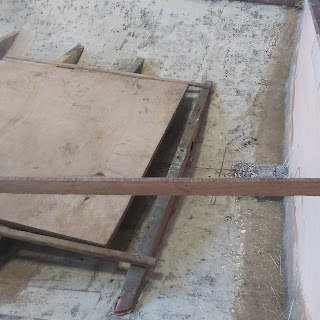 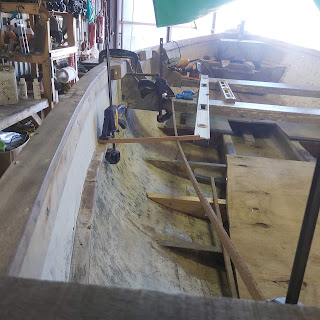 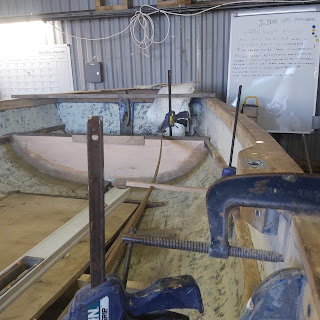 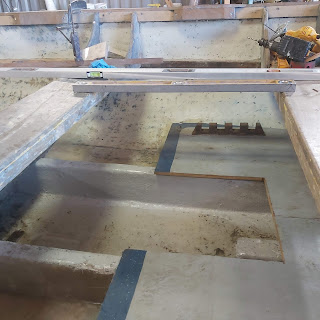 Posted by J-Star Marine Services Builders of fine craft since 1981 at Wednesday, June 23, 2021 No comments:

A non travelling week back at home base for a change

It has been a busy couple of weeks visiting other marinas and boatyards around England in four different counties as far from each other as can be Somerset, Kent, Yorkshire and finally Lancashire. Each of the visits was to a different type of boat and different types of repairs. Thankfully this coming week it is back to my own yard and workshop to get on with the boats in the workshop and in the yard that need working on to get them back to their owners. The work in the workshop is varied from painting decks on a GRP yacht to converting an old rowing boat into a motor launch to go bird watching to removing varnish off a dinghy to building a new 8ft. GRP Dinghy to repairing the holes in another 8 ft. GRP dinghy. So you could say I have my hands full of boat repairs for a while to come. 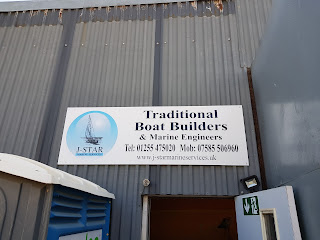 Posted by J-Star Marine Services Builders of fine craft since 1981 at Sunday, June 20, 2021 No comments:

Chance is presently in a crane hire yard in Woodplumpton near Preston in Lancashire.

First day at the Chance was to take a good look around the boat and see how much work was going to be needed to make her sound to move her back to Walton on the Naze where my yard is situated.

The second visit to Chance was with my family and Brother John who helps removes the rubbish from the inside of the cabins. Loose Items, such as the Masts and Booms, which were placed under the boat on blocks to keep them off the ground and keep them straight and out of the weather.

Other items such as cupboard / locker doors and drawers were removed and put in my works van to be transported back to my workshop to be put into storage until they are repaired or new doors and drawer are made where necessary.

Other rubbish which included old vacuum clearer and a number of other items which were removed so the floorboards could be accessed to take a look in the bilge areas of the hull to see what was in them and how much work was going to be needed to clear and sort out this area of the boat.

If we have time we will hope to remove the internal ballast which is the bilge area in the main and forecabin. Once the ballast weights are out of the way then the job of cleaning the forward end of the bilge can begin and see the extent of it condition.

The following time it will be the turn of the removing all the fore and aft lockers and cupboards so that we can access to the hull from the inside in all the cabins. Carefully taking measurements of all the parts we remove so that as much as is possible to refit can be refitted at a later date once the hull repairs are done and the hull is repainted on the inside with bilge paint in the bilge areas and white gloss in the areas which were painted that way when she was first built.

Posted by J-Star Marine Services Builders of fine craft since 1981 at Saturday, June 19, 2021 No comments:

The reason for this is two fold, firstly to expose the inside areas of the hull and gauge the extend of the rot in the planking behind parts of the hull covered by paneling and lockers. Secondly to be able to re-fix the hull planking in the same way it was done the first time round with copper nails and roves and not to relay on just screws. Because this is going to be a full on restoration the rebuilding of the hull planking it will be in the same method as used when Chance was built in 1948. 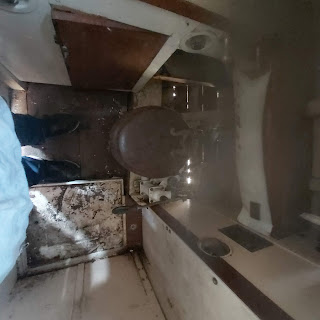 The forward cabin is especially in need of careful measurement being taken and photograph of all the items that are in their present position. However, looking at other James Silver's of a similar size. The hull was not paneled out like Chance, but bare painted hull will mahogany slats screwed on to the frames and ribs to act as back rests for the bunks when the crew are sleeping in the forward cabin. I expect to find evidence of this when I remove the present paneling off the frames as it is done presently. 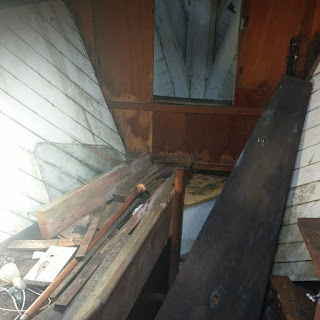 In the aft master cabin the layout is completely not original as the cabin bunk arrangement was not athwart-ships and is not the way this was originally built on other James Silver's of a similar age and size there are two bunks aft and a chest of drawers in the aft end of the cabin. The hope is to remove the present arrangement and see if there are witness marks of the original arrangement and if there is a chance there are plans available which will make it possible to re-fit the original from her build plans and put it back the way she way in 1948.
So that is my plan of action for my next trip to Chance and her ongoing restoration
Posted by J-Star Marine Services Builders of fine craft since 1981 at Thursday, June 17, 2021 No comments:

Posted by J-Star Marine Services Builders of fine craft since 1981 at Saturday, June 12, 2021 No comments: