From no deck beams to first layer of marine plywood deck

After making good the cabin side where it was rotten

The first of the deck beams was being fitted

Then the two fore and aft hatchway beams 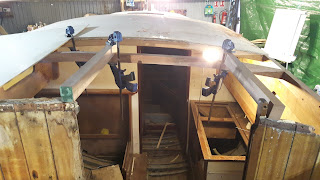 Posted by J-Star Marine Services Builders of fine craft since 1981 at Friday, September 28, 2018